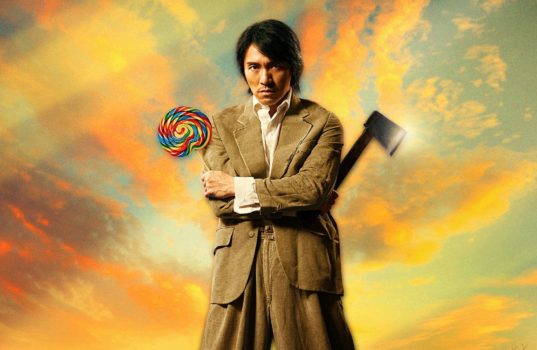 Stephen Chow (“Kung Fu Hustle”) became the biggest winner of the event, rewarded with the best picture and best director awards, his first Golden Horses. But he was not present to claim his prizes.

Set in 1930s Shanghai, Chow’s trademark slapstick comedy has seen the director finally break through to overseas, and in particular, US audiences.

In what may have been the biggest surprise of this year’s Golden Horse event, Aaron Kwok Fu Shing (“Divergence”) edged out fellow Hong Konger Tony Leung Ka-fai to take the award for best actor.

Kwok said he had not starred in many movies and the award marked “another beginning” for his career.

“I will continue to work harder,” he said.

“I want to thank my parents. Without them, I would not have made it today.”

“I want to thank director Hou (Hsiao-hsien), my parents for their continued support,” a tearful Shu said.

Six out of 10 film critics surveyed by the Taipei-based Ming Sheng Daily had favored Leung to take home one of the 18 Golden Horses for his role in “Election,” the story of a bloody power struggle in a Hong Kong triad society.

Six critics had also expected Chow to win the best director statue following his sweep of the Hong Kong Film Awards earlier this year for “Kung Fu Hustle”, the most commercially successful movie in the competition.

“My head is empty. I don’t know what to say at this moment,” Yuen said.

“I want to thank the director for giving me space to be creative,” Wong said.

An array of stars treaded the “blue carpet” at the cultural center in northern Keelung city, where police tightened security after the first death threat in the history of the Golden Horse event.

A man who demanded five million Taiwan dollars (148,809 US) from event organizers was arrested earlier in the week.

The trophy seemed to surprise the singer, who told reporters before the ceremony: “I am not confident this time.”

The lifetime achievement award went to Ke Hsiang-ting, 88, who has played in more than 170 movies since 1941. Ke, twice winner of the Golden Horse best actor category, received a standing ovation from a capacity hall of hundreds of stars and guests.

The Golden Horse Awards are styled on the US Academy Awards, but are decided by a jury along the lines of the Cannes film festival.

About the Author: Contributors