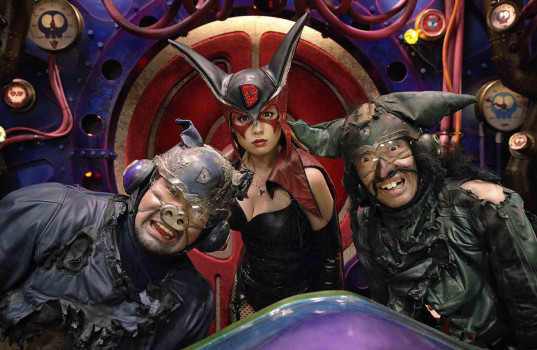 ~~~
Plot: A mystical stone known as “the Skull Stone” was split into four separate parts and scattered across the world. It is said that if all the pieces of the stone are reunited, then the one that possesses the stone can have any of their wildest dreams become a reality.

The Doronjo Gang is a trio of miscreants who have the sole mission to assemble the stone. Their leader is the seemingly wicked, treacherous Doronjo (Kyôko Fukada), an attractive supervillainess who actually just wants the stone in order to fulfill the dream of marrying the secret love of her life. She has two right-hand men, Boyacky (Katsuhisa Namase) who wears a nost mask with a long, pointy nose and wiry mustache (which kind of resembles the character of Waluigi on Nintendo) and Tonzuraa (Kendo Kobayashi), a plump, short man who wears a pig snout mask.

The only superheroes in the world that are capable of stopping the Doronjo Gang from completing their evil scheme is Yatterman, a crew featuring two 13 year old kids, a large dog robot and a smaller robot that flies with mini-propellers. Gan-chan (Sho Sakurai) aka Yatterman 1 is the leader of the group. He is a technical genius who builds robots and is also very clever in combat against the Doronjo Gang. His girlfriend, Ai-chan aka Yatterman 2 is the second component to Yatterman, and together they battle the Doronjo Gang.

~~~
Based on a popular anime series of the same name, Takashi Miike attempts to bring the same energy and entertainment to the big screen. If one is not familiar with the original anime, the film is going to seem a lot like the Wachowski Bros.’ Speed Racer last year. The film does not fail to entertain the audience, most people in attendance at the World Premiere were giggling the entire time and had giant grins plastered on their face for the entirety of the film.

Takashi Miike’s directorial style definitely rubbed off on this material, for there are numerous sexual references that are so excessive it almost becomes cringe-worthy by the end of the film; but as a fan of Takashi Miike, that is not necessarily a bad thing and any fan of his work who has witnessed Visitor Q or Gozu will not be jarred too badly.

At first, if one was not exposed to the anime (such as myself), the movie is going to seem like a completely ridiculous mess, but upon further research via the internet, I have since realized that Miike created a wonderful adaptation of the source material. Everything in the movie was in the old t.v. show, he copied every tiny niche of the television show and incorporated it into the film. I suggest orienting yourself to the show before seeing the film in order to make it a much more enjoyable experience.

« She Meant To Change But Then She Died Heads will roll »