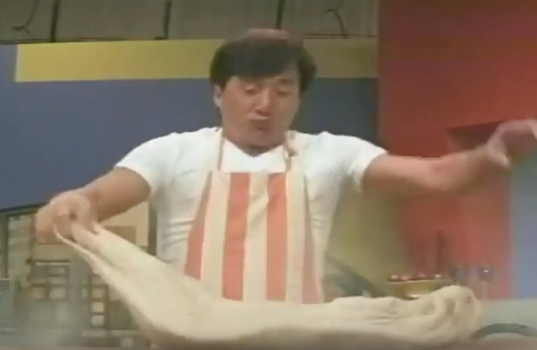 Plot: Jackie plays a popular TV chef in Australia, who get caught in the middle of two rival gangs when a tape of one of their leaders (Richard Norton), killing the other, gets mixed in with his cooking tapes. This movie boasts some exciting and unusual action sequences, involving a horse drawn carriage, and the world’s largest monster truck, with wacky Jackie at the helm.

This film may stand as the lowest point in Jackie Chan’s career (except perhaps for the Golden Harvest sex farce, “All in the Family,” but that one actually sounds interesting to me). It runs incredibly fast. So fast, in fact, it appears to be in perpetual fast-forward. Perhaps this is a clever technique to disguise the lack of a script for this tired actioner. It’s basically a re-hash of what we’ve already seen in Rumble in the Bronx. Rumble wasn’t too great a movie, but Mr. Nice Guy makes Rumble look like a million bucks. Action sequences are re-tread from other movies, jokes are re-corralled for the occasion, and the supporting cast is mind-bogglingly awful. The production was filmed in Australia, which makes me think: a lot of talented actors have come out of Australia, like Judy Davis and Sam Neil. Even the supporting players in most Australian product are good. Were they all on vacation when this one was made? Does every professional in the Australian acting arena charge too much for this rancid production? Nothing besides the action scenes in this film is even competently put together. It’s the poorest of excuses for “entertainment.”