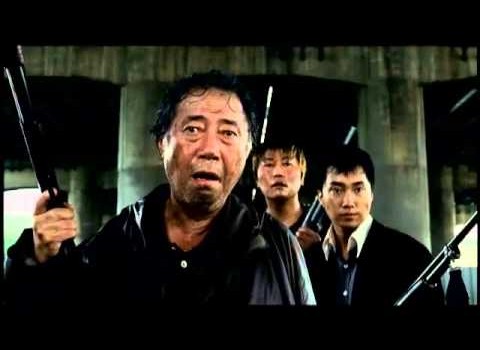 Bong Joon-ho’s The Host is the best kind of genre film, a movie that delivers the conventions audiences expect from a horror flick while also offering surprising new variations on the formula. The plot superficially resembles any number of environmental monster movies from the 1950s, like Gojira or Roger Corman’s Attack of the Crab Monsters, in which human carelessness with toxic chemicals leads to the formation of destructive creatures. In The Host, a U.S. military officer (veteran character actor Scott Wilson) orders an underling to dump hazardous waste down a drain that leads to a river in Korea; years later, a lethal monster emerges from the river and wreaks havoc.

The premise promises a lot of old-fashioned sci-fi/horror kitsch, and Bong does not disappoint. There are many delightful images of the creature rampaging on land and in the water as dozens of screaming extras flee, and these scenes will bring a smile to the face of anyone with fond memories of Japanese monster movies or Steven Spielberg’s Jaws, a key influence on Bong’s film. Like Spielberg, Bong seems never to make a wrong choice in terms of editing or camera placement—every action sequence is timed for maximum impact, and the movie contains both big laughs and big scares. It’s a very different kind of horror filmmaking from what one finds in movies like the Saw series and Hostel. Bong doesn’t skimp on the scares, but the movie doesn’t have any truly nasty moments. It’s as sweet as it is scary, and the audience leaves the theatre energized and giddy, not shaken and depressed. 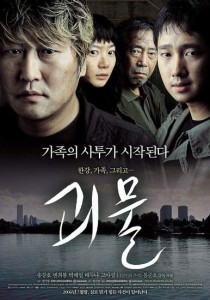 While Bong provides all the expected pleasures of a movie in this genre, what makes The Host special is its completely unexpected emotional resonance. Most of the film focuses on a dysfunctional family that is troubled even before one of its members—a young girl—is kidnapped by the creature. After the child is taken, the tensions in her family reach a boiling point as the characters try to assign blame for the tragedy before eventually joining forces to save the girl’s life. The scenes of domestic strife are perfectly balanced with the supernatural sequences so that each complements the other—the family arguments are given more intensity because of the high physical stakes involved, and the action set pieces are more exciting because of the complex and compelling characters. –juicysnots

The result is an odd but effective cross between Jaws and The Family Stone, though to imply that Bong is doing nothing more than combining elements from other films would be inaccurate—he assimilates his influences but doesn’t imitate them. And the sincerity of his characterizations gives The Host a specific sensibility that distinguishes it from its predecessors; it’s as cheerfully silly as a Corman exploitation movie, but its emotional pull gives it an appeal for audiences who would normally steer clear of movies about rampaging sea beasts. Bong’s love of filmmaking is as obvious and infectious as his love of humanity, and his stylish and entertaining movie is irresistible. – Jim Hemphill, Reel.com

About the Author: Contributors