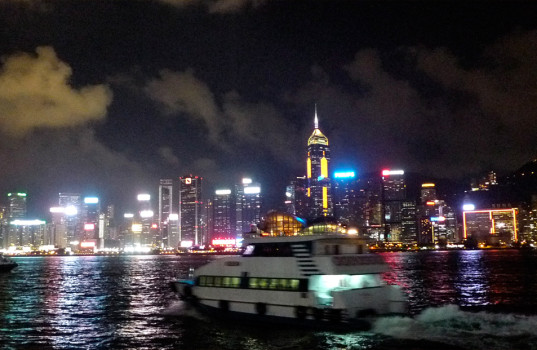 First impression: Survived dramatic landing at Kai Tak airport. Rewarded with a humid, sticky airport. Last impression: Getting continually searched at customs… Had to stand on a box once.

There was confusion at the gate as psycho tour guide Jacquelyn from the ticketing agency and family friend, Mrs. Chu both wanted to drive us to our hotel. We opt for the free city tour and arranged to meet Mrs. Chu later for dinner.

– karaoke bar/restaurant at the Galleria mall

Ergo: malls everywhere… rivaled the number of cell phones in the MTR… in 1998!

Easter Hunt outside ferry terminal: got a free MTR single pass card.  It costs HK$5.00 to get from Prince Edward to Sim City (Tsim Sha Tsui).

We had a top floor room overlooking a park and sports field.

The bathroom was so small, the hair dryer was in a drawer by the TV.

There were only 4 TV stations.

Left a msg for Jonathan.  Jill left several messages; could not reach anyone.  She freaked out.

Dim sum in Tsim City recommended by a jeweller.  Eat where the locals eat, right?

First postcards plus stamps were bought at Star Ferry.

Found congee after our Beijing trip.  Took 1/2 hr to find the right one.  All the ones we’d passed up were filled with old men.  But the one we finally found was brightly lit, had women servers and a mixed crowd.  They laughed at my limited Chinese but we got what we wanted.  Plus those fried crueller things.

Chow Yun Fat poster for a cell phone service? No selfies in 1998.

Laundry hanging from poles outside every apartment window.

I bought all the wrong clothes and shoes. It was too hot to wear my swing coat.  My feet were always swollen, sore, red, blistery. Dainty feet.

Missed an international incident at the Seoul airport over a cigarette.  Security was almost called.  That didn’t deter a fellow female smoke from defiantly continuing with her smoke.

China Travel Services.  What a rip-off.  There are two rooms to book travel—one for foreigners, one for Chinese.  They wanted US$900 for 4 days to Beijing.

Shoestring Travel around the corner saved the day: US$574 for 4 days 3 nights at a 5-star hotel including an English-speaking tourguide.  Dates overlapped HK Film Festival and Tin Hau festival.

After that congee, we checked out YMCA,  Imperial Hotel and Hong Kong Hotel.  Found a great bookstore at YMCA.  Bought “Impressions of Old Hong Kong” postcards plus books on Chinese idioms and short stories.

HK Airport to Beijing: Deja vu Chungking Express in the scene with Brigitte Lin when she loses her envoy.  Here I set off the alarm and had to stand on a crate, to be followed by a female search.

Dragonair Flight was quite bad.  Terrible food.  Mine was a rejected Chicken Satay which I should have returned but didn’t.

Arrived in Beijing 6:30 pm.  They’re one hour behind HK.  Found our group fairly quickly after spilling into the sea of Chinese faces and unfamiliar sounds of language.

Stepped outside for a quick cig and found another Mong Kok morning only grayer, muggier and more eerie.  Fog or smog I couldn’t tell.

But our hotel airport shuttle was here to save us.

Lovely hotel.  Amazing city. Vast tree-lined boulevards. Bicyclists fight with motorcabs and vehicles half the size of a standard auto.

Late getting out to dinner. Found a food court in the basement and had interesting though bland Beijing cuisine though it was billed Guangzhou.  Every Chinese girl stared at us and sized us up, particularly the Catwalk bar girls.

Mon or Melissa, our guide, greeted us late the next morning with a busload of tourists from the Shangri-la hotel.

We thought our tour bus driver drove like a maniac (he continued to thrill us throughout).  Not true. We found worse.

Long taxi trek to Qianjingmen Duck Restaurant, so famous for its Peking Duck according to Lonely Planet and confirmed by a hotel guest it was listed on the tour map.

It was indeed the best duck we ever had.

Then we wandered down Triad Alley and quickly wandered back out after too many “Hellos!” and not enough street lights.  Maybe it was what looked like a bombed out building.  No matter.

No sooner did we exit the alley when Jill found a new best friend who became attached to her quite literally for life.  A young boy of about 8 or 9 who was rubbing his belly and begging us for food money.  The look on Jill’s face was precious.

We quickly hailed a cab and then the adventure really began.

The hotel had thankfully given us one of those “Please Drive Me?Back To The Hotel” cards.  It took awhile but he eventually was able to read the small print in the darkness and identified where to take us.

And that he in haste as he plowed through intersections with intent to maim.  Bicycles careened out of nowhere in all directions.  One man just stopped perpendicular to the cab in the middle of the road and waved defeatedly for us to pass.

Psycho cabbie then pulled into the wrong driveway.  He corrected his mistake by driving straight into oncoming traffic. But he didn’t bat an eye.  In fact, he paused ever so slightly as he got his bearings and proceeded to move headlong towards the headlights before beelining it back into the correct lane.  After Jill tipped him with some American singles, he showed us his appreciation (and lack of awareness of our true feelings) by getting out of the cab and opening the door for us.  He even waited to make sure we had verified that indeed he drove us to the right hotel.

We gratefully accepted (very good) coffee and almond cakes in the bar lounge and reflected upon the evening’s free entertainment.

Last day in Beijing. Still hot and smoggy.  There was a little sliver of sun mid-morning.  We never made it to Silk Market. Early breakfas again at 6:30 before browsing the hotel shops.  I gave in and bought more books, propaganda-filled such as they were.  Pictorial History of the War Against Japan, Diary of a Diplomat part IV in a series.

At the airport 2 hrs early, too early but we got checked in without incident.  It’s just so damn hot here! Did they really think those fresh flowers by every check-in counter would make us forget?

And did I mention the mutant pollen that hung in the air? Lovely to behold, monstrous to inhale.

Uneventful flight.  Got some sleep. Earplane Plus still doing wonders.  Kept running into members from the Beijing tour.

On the airbus after debarking I saw an old Chinese woman whose finger was bleeding.  I offered bandaids then a Western woman gave her a medicated one. The old woman stared at all the blood, but didn’t seem to mind.  Her sweet though severely-lined face seemed to say that she’s seen worse in her time.

But it gave me another scene idea:

Nick and Merlin duking it out and when we think he’s down, she licks blood from his face. For Jill’s script, I thought of using claim tickets as clues.

Newton Hotel via cab by 5:30 pm.  We cleaned up and then asked the front desk a ton of questions about movie theatres, night cruises, even dad’s HK address.  But we had a major appt with free email so we bus-ed it to Star Ferry, crossed over to Central, stopped off at Swindon’s Bookstore, bought postcards, then paid to go back inside the terminal where the Pacific coffee shop was offering free access to internet email.

So very tired by now but we wandered around Tsim City and Nathan Road looking for a restaurant.  Couldn’t resist stopping off at HMV, an audio video mall, to find Bride With White Hair laser disc for Fran.  It was only HK$105!  (I didn’t buy it until a couple of days later.) Instead, I got a couple Leslie Cheung CDs.  Tomorrow is HK city day, Stanley Market (god more shopping), maybe a movie… studio? Yes, please!