It was soooooo much fun editing this project. You know how much I love my bloody action movies!

This project was completed for a post production class that mimicked real life. The instructor assumed the role of the producer/post supervisor. The focus was on workflow (input/edit/output, correct formats, polish the sound) and taking over another editor’s project versus aesthetics (story) although he wanted us to explain our clip choices, why we chose that angle, that shot, etc. (That was nerve wrecking. You always feel judged, rightly or wrongly, depending on the instructor.)

Our assignment was to postpone the reveal but were allowed to make most other creative decisions (there were one or two other requirements such as including the U-turn into the back of the hotel). The only notes we got after our rough cut were either shot substitutions or moving scenes around. Then we did our final cut. He also made some comments on my sound choices (“That is a Honda engine, take it out!”,”No, you can’t have tires screeching on gravel, take it out!” Although it was not intentional, I thought my mistakes were incredibly funny. He did not.)

There was about an hour’s worth of footage. We’ve organized bigger projects before but this one was different. There were more synced clips and we had to find footage that might be buried in another bin, without audio, etc. Then we subclipped the master files, named them, added comments, etc. Tedious but necessary. Generally I like organizing stuff but it’s definitely much more satisfying to do the cut. Usually it’s the assistant editor who has to clean up projects vs the editor. Editor jobs are harder to come by.

Here’s a screenshot of a typical work interface near the end of a project. All the files have been sub clipped, finishing up color correction, titles done, checking for sound. As far as editing aesthetics go, I’ve still a long way to go. But there are moments, certain cuts, that do make my heart jump (ex. the silence after the gun cocks, when Ed knocks the knife out of Jacob’s hand). Not perfect by any means, but it makes me smile because it’s something I didn’t think I could ever do. Some instructors say that that is important to strive for so that gives me hope that I can get better. 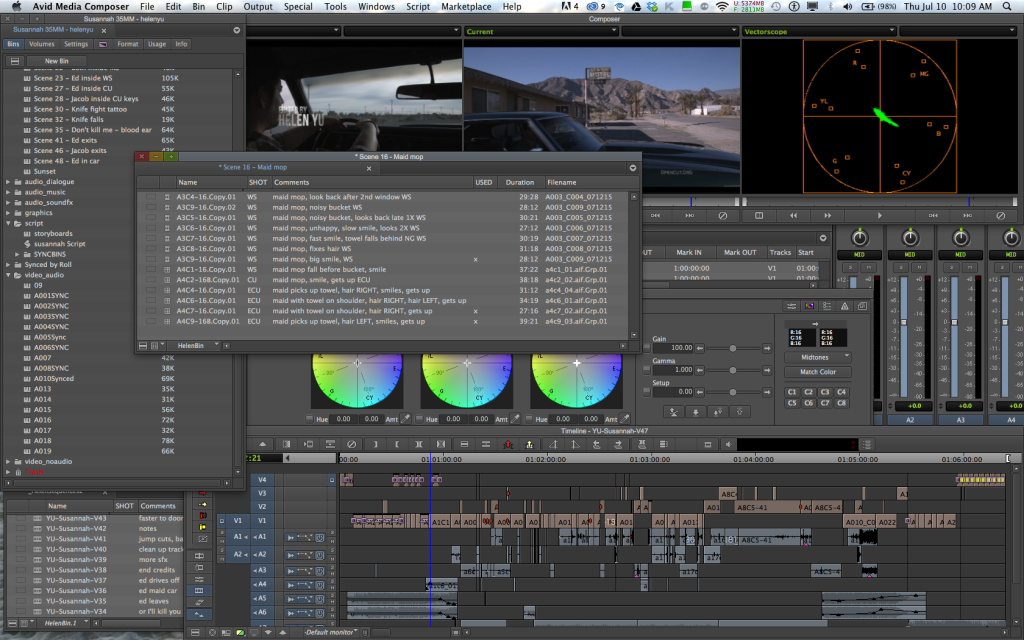 « The Value of a Good Site Map Project: Legend »