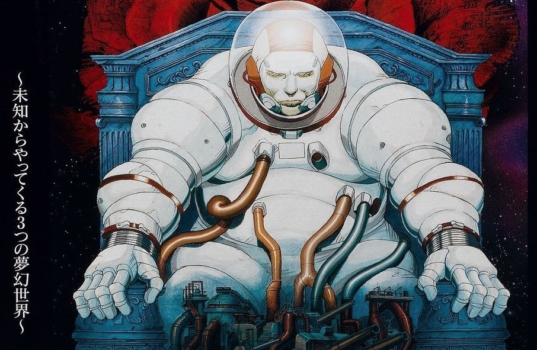 ~~~
Plot: Memories is made up of three separate stories. In the first, Magnetic Rose, two space travelers are drawn into an asteroid world created by one woman’s memories. In Stink Bomb, a young lab assistant accidentally transforms himself into a human biological weapon set on a direct course to Tokyo. The final episode, Cannon Fodder, depicts a day in the life of a city whose entire purpose is the firing of cannons at the enemy.

~~~
Katsuhiro Otomo got back in the saddle producing and directing one segment of this omnibus film. His segment, “Cannon Fodder,” is the most interesting in the group. The first one, “Magnetic Rose,” is an okay kind of sci-fi tale of a deserted space colony that seems to be haunted, and the second story, “Stink Bomb,” is excrutiatingly boring. Like Most omnibus-style anime to date, it is extremely uneven. And in this one, none of the stories are too interesting. It’s full of style, all right, but it doesn’t have a whole lot of substance.