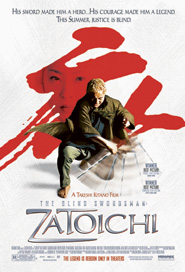 Director Takeshi Kitano (Sonatine, Brother) takes on Japanese cinematic legend, Zatoichi. Kitano stars as the blind wanderer with a distinctive red cane and a shock of platinum blonde hair. Soft-spoken and rumpled, Zatoichi makes a living as a masseur and gambler, but his humble, shuffling facade mask a lightning-fast, lethal swordsman. When Zatoichi enters a remote mountain town, he discovers that the Ginzo gang are extorting the townsfolk with the aid of a mighty samurai ronin, Hattori (Tadanobu Asano). Quickly making friends with a talkative fellow gambler Shinkichi (Guadalcanal Taka), Zatoichi meets two mysterious geishas (Daigoro Tachibana and Yuko Daike) who have sworn to avenge their parent’s deaths. As the Ginzo gang tighten their hold on the town, the stage is set for a violent and bloody confrontation.

Described as a cross between Johnny Depp and Toshiro Mifune, Tadanobu Asano is certainly the hippest, if not the single most important, Japanese film actor working today. While best known for characters who are psychologically offbeat, if not downright psychotic (Kakihara in Ichi the Killer), he is also known for his work in Gohatto and Shark Skin Man & Peach Hip Girl. He is also a vocalist for Mach 1.67, a music band he started with director Sogo Ishii.

David Chute has been a working film journalist since 1977. He has held staff jobs at the Boston Phoenix and the Los Angeles Herald Examiner, and has written for L.A. Weekly, Variety, and Premiere. For Film Comment he guest-edited the “midsection” supplements “Made in Hong Kong” (1988) and “Bollywood Rising” (2002).

Andy Klein is film editor and chief critic for Los Angeles CityBeat and ValleyBeat. He has written about Asian film for Variety, the Hollywood Reporter, the L.A. Times, the L.A. Reader, Filmmaker, Spin, the New Times chain, and CIAK, among others. He appears regularly on KPCC’s Film Week and KCET’s Life and Times.

John Nathan graduated Harvard in 1961 to teach English literature in Tokyo. He studied linguistics at Tokyo University and met most of the major Japanese writers of the period, including Kobo Abe and his friend, Kenzaburo Oe. From 1968 to 1994, in addition to teaching at Harvard, Princeton and Tokyo University, Nathan had written, produced and/or directed dozens of critically acclaimed documentaries on Japanese culture including his award-winning film on Shintaro Katsu, the creator of Zato-Ichi, called “The Blind Swordsman,” a portrait in depth of Katsu directing himself in The New Adventures of Zato-Ichi. Since 1994, Nathan has been teaching graduate and undergraduate courses at UCSB in advanced Japanese, modern Japanese literature, Japanese cinema, and the theory and practice of translation.

Joey O’Bryan is a former film critic — Austin Chronicle and Film Threat, among others — turned screenwriter. He toiled in the trenches for Roger Corman and Sammo Hung before co-writing the 2001 Hong Kong action hit FULLTIME KILLER for acclaimed director Johnnie To Kei-fung. Honored at the Hong Kong Film Critics Association’s Golden Bauhinia Awards as one of the top ten Chinese-language films of the year, it was distributed all over the world following it’s selection as Hong Kong’s official entry into the Academy Awards Best Foreign Film category. He has since worked on a Japanese action fantasy and an independent Indian melodrama, also setting up projects with talents as diverse as Hollywood mega-producer Mark Gordon and Hong Kong martial arts actor/director Hung Yan-yan. He has just recently begun another collaboration with Johnnie To Kei-fung.

TICKETS: This event is FREE. RSVP at www.asianfilm.org or www.FILMRADAR.com

*Advance seating has closed. We will be sending out confirmations this weekend. We will do our best to notify everyone when and if seats open up. Please let us know if you cannot attend so we can release your tickets to someone on the wait list. You must pick up by 7pm. If you don’t receive a confirmation email from us by 10pm PST May 25th, please check the Arclight Hollywood theatre on May 26th by 7:15p for a standby line.

Thank you again for your support and enthusiasm!

Special thanks to: Miramax and Filmradar.com