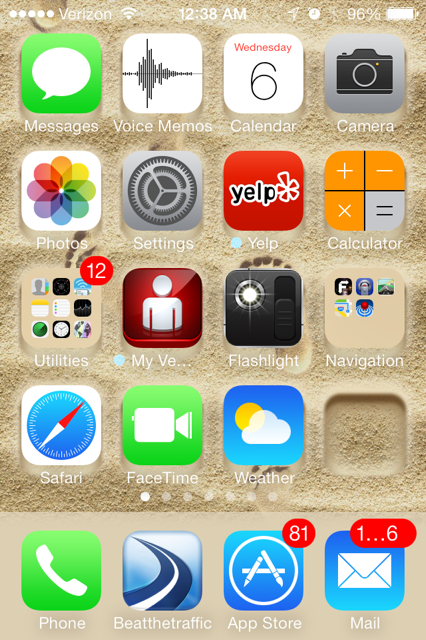 I’m late to the party as this rant has been going on for the past 6 months. Technically speaking, the iOS 7 interface sucks rocks.

I had to replace my iPhone 4S this week and I was ignoring the dreaded 7 for so long that it didn’t even occur to me that my new/refurbished phone would have 7 already loaded.

My old iPhone was acting up the day I got it back in June. But I lived with it mostly out of laziness, until it stopped sending text messages, landscape orientation stopped working, gray screen of death, etc.

I opened the box to my new phone and immediately screamed OH NO! in a loud whiny voice, hoping my utter disgust would make it all a bad dream. It was not. Hours later from scouring the web for fixes (and finding none), the reality is sinking in. We are stuck with the ugliness and confusion, at least for now.

Here are snippets from Joshua Topolsky’s brutal (but brilliant) assessment of the dreaded iOS 7 design on The Verge:

“…childlike icons… styles vary wildly from app to app… the Weather [icon], an amateur mishmash of sun, clouds, and a gradient background that was highlighted as part of Apple’s new “grid system.” It might be on a grid, but it doesn’t look very good… the homescreen feel and look like the work of a lesser designer.”

“The Control Center, a new option which can be summoned with a quick swipe up from the bottom of the screen, is actually a great idea but its design and organization of items is bizarre.”

Gabriel Grand: Home Screen Still As Ugly As Ever

Alex Kalicki, iOS7: The Good, the Bad, and the Ugly

25 Designers Show How iOS7 Should Have Looked