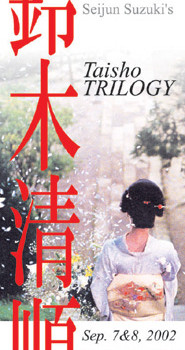 Maverick director Seijun Suzuki is once again stirring filmgoers out of their slumber with his latest film, Pistol Opera. Now see his most ambitious achievement, the fabled “Taisho Trilogy,” at the JACCC Theater. For the first time in sequence on the big screen, Seijun Suzuki’s Taisho Trilogy — Zigeunerweizen, Mirage Theatre and Yumeji. A triple-threat descent into mystery, betrayal and madness. For mature audiences only. One weekend, one screening per film — one chance to find out why you shouldn’t have missed “Pistol Opera.”

Thematically-related and made over a twelve-year period, the Taisho Trilogy takes place in an era of, to use Suzuki’s words, “eroticism, grotesqueness, and nonsense.” A world away from his hard-boiled crime movies, these films look at a vital period in Japan’s history through a cracked kaleidoscope. Suzuki’s heady images ripple with enigmatic beauty; his stories, ranging from the mystery of Zigeunerweizen and the comedy of Yumeji to the ghostly love story of Mirage Theatre, are urgent and fascinating. The films showcase Suzuki’s dreamlike sense of narrative as well as his landmark flair for cinematic color. It’s a trip down the rabbit hole seen through the looking glass: in Suzuki’s world, the absurd and nonsensical take on a mysterious and horrifying, yet wonderful and captivating meaning.

Never released in the United States and lost to the world for the better part of a decade, these three films are among Suzuki’s very best. Seijun Suzuki’s Taisho Trilogy is a must-see event for fans of Suzuki and fans of the cinema.

Featuring a Suzuki-style fashion extravaganza and silent auction sponsored by Kimono-Ya, film forum and more. If you miss this, you will never forgive yourself.

Proceeds from the auction will immediately benefit Streetlights.org, a nonprofit community outreach and training facility to help ethnic minorities in Los Angeles prepare for jobs in the entertainment industry. In addition, your contribution will fund more events by the Asian Film Foundation.

A vibrant display of traditional and contemporary kimonos set to a custom soundtrack and a backdrop of Suzuki film images. Please pick up your Auction Guide for full details. Portion of the proceeds will benefit Streetlights.org.

The World’s Largest Vintage Kimono Company
In the U.S.A. since 2001

As the very first authentic vintage kimono store, KIMONO-YA came to the U.S.A. in 2001 from Japan. Its headquarter office is located at the LA Mart in Downtown Los Angeles with stores in the Century City, Westside Pavilion and Santa Monica Place malls. KIMONO-YA offers over 3000 vintage, silk kimonos and many other silk products at surprisingly reasonable prices. KIMONO-YA also has an exquisite collection of sash belts for kimonos, the obi and obiage. KIMONO-YA is a unique and elegant choice for lounge apparel. Its collection is marketed as décor and wearable art. Visit http://kimonoyausa.cool.ne.jp/ or call 310-286-1121.