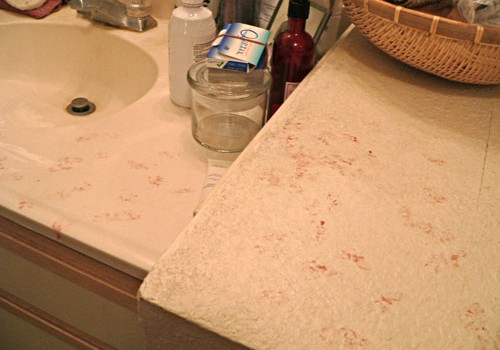 After wasting a couple hours at the Oaks mall hunting for reasonably priced luggage… I get home to find blood all over the bathroom counters and my laptop missing.

At first I didn’t notice the blood because of the glare of the lights on the counter. And then I thought I’d walked into a horror movie… dozens of bloody paw prints everywhere. A part of me wanted to do a CSI.. was there a struggle?? Were the cats fighting? Are they alive?!

A few minutes of screaming later… Maus emerges from under the bed. He looks kinda guity or spooked… it’s hard to tell with him.

I picked him up and did a quick exam… yup, there’s blood on the back paw. There’s even blood on my arm now. I looked closer… the nail seems to be in an odd position, like it’s left when it should be right…

Luckily the vet was nearby and opened on Sat. Normally you need an appt but when I got there, it was empty so they took him in right away. He was also due for other stuff (fecal check, boosters) so they got that done in addition to cleaning and suturing his toe. The nail was completely removed from his toe. Everyone was amazed at that. I’m not sure if it will grow back. As we were leaving, 3 dogs, 2 cats and their owners came in for emergencies.

So although Maus lost a nail, he got a purple sock instead… He’s not thrilled about it though… it has to stay on for 2 days. He still seems spooked. Merlin whacked him on the head when we got back.

The laptop was knocked off the desk, hanging by the remaining cables that didn’t dislodge. The monitor and other desk items were also in disarray. Maybe something spooked him while he was doing his usual walk across the keyboard or he was spooked after he knocked the laptop over… I’ll never know what happened. The secret’s locked away in that Maus head.

The back paw is really taped up and they put some foul smelling stuff on it so he won’t chew off the bandages. He’s tried but so far he won’t be able to get it off. So he does a funny little dance like Chaplin when he walks… every few steps, he starts shaking his hind leg like he’s trying to get rid of fleas. I have to go into the other room to laugh.