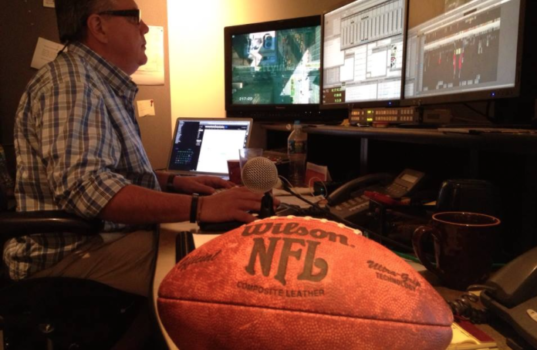 Interview of Steve Audette of Frontline

From Steve Hullfish of provideocoalition.com, a wonderful and lengthy interview of Steve Audette, ACE and Senior Editor of PBS’s Frontline.

Steve Audette, ACE has been editing at WGBH since 1990, mostly as the Senior Editor on two of PBS’s flagship products, NOVA and Frontline. Steve and I met when we were both selected to take part in the first Avid Master Editors Retreat in 1996 in Martha’s Vineyard. I’ve followed Steve’s critical successes as an editor since then and figured that this would be a great time to catch up with him. One of his last documentaries “United States of Secrets” recently won EMMYs for Best Documentary and Best Current Events Long Form, as well as a Peabody Award and a duPont Columbia Award for journalism. In this conversation we talk about “United States of Secrets” and another of his big double-episode Frontlines from 2013, “League of Denial” which is about the NFL concussion cover-up and the discoveries of Bennett Omalu, M.D. (the same story covered in Will Smith’s “Concussion” feature film). League of Denial rebroadcasts December 15 (part 1) and December 22, 2015 (part 2). It also garnered a host of awards, including a Peabody Award and a George Polk Award.

AUDETTE: I’m also adding another layer on that. I always look for those Bernini moments. There’s this great architect/sculptor/painter and peer of Da Vinci who made these amazing sculptures of religious figures. And there’s one called “The Ecstasy of Saint Theresa” that’s just unbelievable. Her facial expression looks so alive. And he was once asked, “How is it that your sculpture is so alive and that the emotion is so evident?” And Bernini in effect responded, “I always wait for that moment before someone speaks or after someone speaks, to see the truth.”

HULLFISH: Wow! I love that. So true.

REWORK AUDETTE: Frequently in my cuts, I’ll try to add those moments where you can see this – I’ll hang on a subject as long as I can, even if it affects my pacing to some degree, because I’m trying to communicate something about what was just said. Is it something they believe with all their heart and soul? Are they just spinning us? Or maybe it’s an outright lie. But every sound-bite I cut into a documentary should be able to be played back to the speaker and have him/her say, “Yes that is what I was saying.”

Make sure you read the whole article! Full article is here: